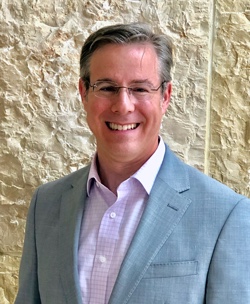 Originally from Houston, Texas, Rabbi Stoller will be joining Temple Beth-El on July 1, after completing a five-year tenure as senior rabbi of Temple Israel in Omaha, Nebraska.

Stoller, his wife, Karen, their daughter, Lindsay, 13, and son Zachary, 8, are thrilled to become an integral part of the Temple Beth-El family when they relocate to Great Neck this summer.

“The rabbinate is more than my life’s work; it is the essence of who I am,” said Stoller. “I am an effective leader because I see myself as part of the community I lead. I am good at building personal relationships because I enjoy people and want to be their friend. I just go out there and try to be myself because I believe that, in the end, all of us are seeking the same thing: to feel loved, to find joy in life and to be embraced by people who genuinely care.”

Following the dictum that “the teacher of Torah must be a student of Torah throughout his life,” Stoller is currently pursuing a doctorate in halakhah (Jewish law) at Hebrew Union College–Jewish Institute of Religion and has published numerous essays on Jewish law, practice and theology.

An active member of the Central Conference of American Rabbis, he serves on the Responsa Committee, the annual campaign team and the editorial board of CCAR Journal: The Reform Jewish Quarterly.

Stoller received his ordination from HUC-JIR’s Cincinnati campus in 2008 and then held the position of associate rabbi at Congregation B’nai Jehoshua Beth Elohim in Deerfield, Illinois, until 2017. Previously, he earned a degree in Honors Business and Finance from the University of Texas at Austin in 1996.

Before entering rabbinic school, he spent seven years in professional politics, working on campaigns in Texas, Colorado and Illinois, and serving as press secretary to then-U.S. Senator Peter Fitzgerald from Illinois in Washington, DC, from 1999 to 2003.

After seeing the Pentagon burn from his office window on September 11, 2001, and learning of a childhood friend’s death from brain cancer a year later, he knew the time had come to follow his deeply held desire to become a rabbi.

“It was then that I finally understood: Life is fragile; we do not know how long we are going to be here,” he said. “For several years, I had been too fearful, too anxious about change to pursue what I knew in my heart I wanted to do with my life, but now I was ready to go for it. Aside from marrying Karen and starting a family, it was the best decision I have ever made.”

“My mission as a rabbi is to shepherd my congregants toward discovering their own personal pathways into Jewish life,” he said. “So that when they set their feet upon them, they will experience the transformational power of Judaism, connect with people who share their values, find meaning and purpose in their lives, and feel the loving embrace of God and community more deeply than they ever have before.”

Get to know the rabbi further at Saturday morning bagel breakfasts, followed by Torah study, on July 2 and July 9, at 8:30 a.m. at 5 Old Mill Road in Great Neck.

All are welcome. To learn more about Temple Beth-El, visit www.tbegreatneck.org, call 516-487-0900 or email [email protected]