A proposed four-story senior living facility at 12 Irma Ave. has become the site of the latest skirmish for Port Washington residents over requests for multiple zoning variances.

Efforts to build a stronger united front against the project culminated in a meeting on Oct. 17. Concerned residents met at the Port Washington Public Library to discuss and plan for future courses of action. They also voted on which talking points they’d like to address when the eventual meeting with the developers occurs.

While there has been no formal meeting date or time set, community organizers and the project’s developers plan to host an open meeting to discuss workable compromises within the next week or two.

This situation mirrors the continuing debate over the proposed $130 million, seven-story, 176-unit residential development on 145 West Shore Road. While different in terms of size or cost, the potential effects on the community are alarming some nearby residents in similar ways.

No formal coalition has been formed yet. But organizers, like Linda Maryanov, are changing this. As a resident who lives near the proposed Irma Avenue site, she said that as it stands, the current proposal makes little sense.

“The developer is contemplating putting a four-story building in a neighborhood that is predominantly two-story residential — not exclusively,” she said.

Timothy and Terence Higgins, of Manhasset, make up 12 Irma Ave Realty LLC, as the applicant and owner of the land subject. They have owned the two lots that make up the property since November 2020. The proposed units will be for seniors age 62 and older, according to a developer-submitted permit.

Kathleen Deegan Dickson of Forchelli, Deegan and Terrana, who spoke on behalf of Southern Land Company for the West Shore Road residences at the Sept. 28 public hearing, is also serving as an attorney for 12 Irma Ave Realty LLC.

Deegan Dickson, in a statement to Blank Slate Media, said if granted, the project would have a favorable impact on the aesthetics of the area and surrounding property values when compared to the more intense commercial alternatives that are permitted in this location.

“Senior apartments can provide an appropriate transition from and buffer between the lower density housing north of the site and the busy commercial area along Main Street,” she said. “Plus, and most importantly, this use will provide an additional housing option for the residents of Port Washington.”

The developers received a notice of disapproval from the Town of North Hempstead on June 23. In it, Glenn Norjen, deputy commissioner of the Department of Buildings, says their permit was not approved because of multiple contradictions to the town’s code.

The Board of Zoning and Appeals hears and decides on appeals and variance requests.

The developers applied for a conditional use permit and variances for height, setbacks and parking June 29. One variance is for building height; while its Business B zone zoning only allows for three stories and a maximum height of 45 feet, the developers want to build a “partial fourth story.”

The property also needs a variance from the minimum lot area requirement, which requires a minimum lot size of 40,000 square feet. The applicant is proposing construction on a 14,400-square-foot lot.

“The property is located within the downtown area of the Hamlet of Port Washington, walkable to the train station and many shops and restaurants, and therefore should be viewed as a transit-oriented development,” said the application’s addendum. “There are no other available parcels in the vicinity that meet the lot size requirement of the Code.”

Other variances include density exceeding 32 units per acre. For a 14,400-square-foot lot, the maximum number of units permitted is 10, while the proposed project includes 18 units.

“Senior citizen housing is in high demand within the Town of North Hempstead in general
and in Port Washington specifically, and this use is appropriately located to be walkable to
stores, restaurants and transportation,” said the application’s addendum. “It will have no negative impact on the health, safety or welfare of the community and, in fact, will have a positive effect by providing a much-needed housing option with minimal impact on Town services and the Port Washington school district.”

The developers said they cannot build the project without the requested variances and contended there will be no undesirable change in the neighborhood’s character or a detriment to nearby properties by granting these variances. However, many who live near the proposed site offer a different story.

Irma Avenue is a major cut-through and transitional avenue from Main Street to Port Washington North. Opponents like Maryanov and Cheryl Littman, nearby residents, said it would be out of character for the neighborhood and bring more traffic to the area.

“This is not a case for me of ‘not in my neighborhood,'” said Maryanov. “This is just a really bad intersection to bring up that number of cars into the neighborhood. And if you don’t have sufficient [parking spaces] for this building, where are they going to park? On their heads?”

The two said that they do not disagree with multiple-unit senior housing in Port Washington. But their traffic concerns within Port Washington aren’t unique to them. Residents assembled at the Paul D. Schreiber Senior High School Auditorium for a special town hall on traffic issues in June.

The developers, in their applications, claim the project will not bring in a substantial traffic increase. Patrick Lenihan, director of transportation for VHB Engineering, supported this in a traffic and parking evaluation submitted to North Hempstead.

“The proposed redevelopment will be adequately serviced by the existing roadway network and no off-site mitigation is necessary or recommended,” he said. “Based on our findings, it is our recommendation that the parking variance be granted.”

North Hempstead’s Board of Zoning and Appeals would have heard the issue on Sept. 21 before they moved it back to Oct. 26. But the applicant requested another adjournment, seeking to revise their plans and to meet with residents over their concerns. Nov. 9 is currently set as the new date.

“We want something sensible to be built there,” said Littman. “And we didn’t think that this proposal was sensible given all of the significant variances that were needed, the character of the neighborhood and all of that.” 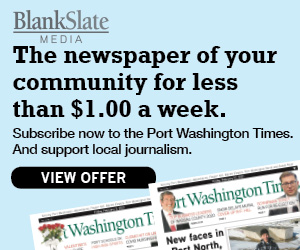