Mayor Christopher Devane gave an update Thursday on the mother and son injured in an accident on Jericho Turnpike Wednesday.

At a Board of Trustees meeting Devane said a New Hyde Park first-grader and his mother were walking on South 11th Street and crossing Jericho Turnpike going northbound when a car hit them. The mayor was in the area when he saw the mother lying on the road and the child off to the side in a stroller.

“Those of us who were there had no idea that [the child] was injured,” he said. “And when I say those that were there, everybody was there — the Police Department, Fire Department, a lot of people were there.”

Even though the child had a fractured skull and brain bleeding, Devane, who has been in contact with the family, said the boy is “doing OK.” As of Tuesday, the child had been discharged from Cohen Children’s Medical Center.

He said the mother suffered a severe concussion. She has also since been released from the hospital and is back home.

“I communicated to [the father] that whatever the village can do for you in any way, shape or form to assist them…we’ll certainly do so,” said Devane. “He was very appreciative of that. Please keep them in your thoughts and prayers.”

Before the meeting, the village hosted its second annual Lighting of the Gold Tree to raise awareness of pediatric cancer.

The village sign and the surrounding area were decorated with gold lights. Gold bows and lanterns were sold to raise money for the Mary Ruchalski Foundation and the Katie McBride Foundation. Both girls had cancer and died before turning 13.

Jeanne McBride, Katie’s mother, offered her remarks on the event and her daughter.

“Unlike Mary, [Katie] wasn’t a great student, she wasn’t a great athlete,” she joked. “But she was a great kid. When she walked into a room, she lit it up. She had a personality.”

The Katie McBride Foundation has held many events for pediatric cancer research, including Katie’s Koncert and Katie’s Run. Since 2010, donations have totaled $432,500.

According to the American Cancer Society, cancer is the second most common cause of death in children between the ages of 1 and 14 after accidents. In 2022, it’s expected that 1,050 children under the age of 15 will die from cancer.

Carol Ruchalski, Mary’s mother, could not attend because of illness. Jeanne and other McBride family members read a statement she had written on her behalf.

“September is always so full of possibilities and beginnings and excitement about what lies ahead,” they read. “But for bereaved parents, September is a stark reminder that their child’s life was cut short too soon and that there will be no new beginnings.”

The remarks addressed the long-term health effects of cancer treatment as well as survival.

“It takes a village, it takes caring individuals like yourselves to support our foundation and help us to not only remember my sweet Mary,” the Ruchalski statement read, “but all the other fighters who have gone before her simply because there were not adequate options for them. The lights from this tree and lantern, I believe, can be seen from heaven and beyond. Our angels are very proud.”

Anyone who wishes to get more information or support the two foundations can do so at www.katiemcbridefoundation.org and www.themaryruchalskifoundation.org. 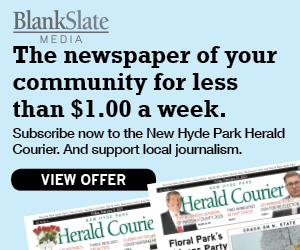