The future is bright in Williston Park

Saturday’s board of trustees had some new faces sitting on the dais as eight fourth-graders from St. Aidans, Center Street and Jackson Avenue schools conducted the public meeting as part of winning the essay contest held every year in the village.

Fourth-graders in each school submitted an essay to the village, writing what they loved about Williston Park and what they would do if they were mayor.

The residents in attendants got their usual reports from village trustees that were readied by each student. The village tradition started in the late 1990s under Mayor Doreen Ehrbar.

After winners of the contest were picked, the role each student got is picked randomly, Mayor Ehrbar said.

“The process was very difficult. There were a lot of essays that were fun to read and it was very enjoyable,” Ehrbar said Saturday morning.

Acting Mayor Sanghani thanked everyone who attended and organized the village’s Veterans Day celebration on Nov. 11 before saying the village’s tree lighting ceremony will be held on Dec. 4 in front of village hall at 6:30 p.m.

On Sunday, Dec. 18, the village will host its winter concert at the gazebo.

Before finishing her report, Tanishka Sanghani said Williston Park is a great place to live and if she was mayor she would encourage more activities at the library, bigger celebrations each holiday installing bike lanes, among other things.

“I would also install garbage cans on major roads, brighter streetlights and use more solar energy wherever possible,” Sanghani said. “I hope my suggestions will be useful and make this village even better for the young citizens.”

Acting Deputy Mayor Ashlyn Galante thanked the recreation committee for the great job they did during the ragamuffin parade.

The village is also hosting its 8th annual family fun run/walk on Saturday, Nov. 26, held in honor of Amalia “Molly” Murphy, a village resident who died in 2012.

Registration at Kelleher Field begins at 8 a.m. that morning before the race/walk begins at 9 a.m.

More information on the event can be found on the village’s website.

Galante also suggested a kid’s movie night once a month, a sports night at Kelleher Field and additional events at the pool.

“I would also like to do more fund-raisers like bake sales to help those in need,” Galante said. “You could leave boxes around the village and after a month they would be filled.”

Acting Trustee Chougar read Carr’s report, who said the students were sitting among future leaders and politicians.  He added that when he is mayor, he’s going to bring cookies for everyone each holiday.

“If I was mayor I would start a program called ‘holiday fun’ where any holiday students have off we do activities together,” Chougar said. “I think we should do this because kids won’t be bored when they don’t have school and we can learn about different cultures and where each holiday comes from.”

After reading her police report, acting Trustee Claire Pollin said she would add more lights on the playground and close off more streets for Halloween.

“This way kids can go trick-or-treating safely with their friends or family,” Pollin said. “In the summer, I would have more block parties which are fun both for kids and parents.”

Acting Trustee Joseph Iannotti said all the information for next year’s Little League season could be found on the league’s website or Facebook group. The beautification committee is also looking for volunteers to decorate the village during the holiday season.

As mayor, Iannotti said he would focus on food and clothing drives, more sports to get kids off their electronic devices and a few new additions.

“It’s a great physical education for kids. I would add a monthly recreation night where we get a DJ, candy, chips and other things kids like,” Iannotti said. “I would also hire a comedian to keep the kids laughing.”

After reading her report, Acting Village Clerk Erin Flaherty said she would create a kid’s corner as mayor that includes a gym for sports, a cafeteria for snacks, crafts and game nights.

“I will also have tutors to help kids with their homework,” Flaherty said. “Also, sometimes moms and dads have to go to work early in the morning so we can have people make sure kids get on the bus and get to school.”

Acting Superintendent Schnurer said the road project has completed all curb and sidewalk work. The next part of the project will be installing new storm drains on Fordham street.

“One thing I would do as mayor would be a movie night in the village on Willis Avenue every Saturday,” Flaherty said. “This would help kids and adults relax after a long week of school work.”

Each student was presented with a certificate of appreciation for their work Saturday and treated to refreshments and snacks following the meeting. 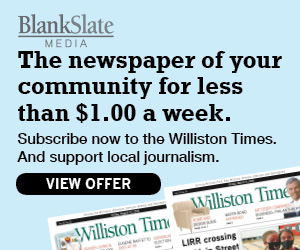