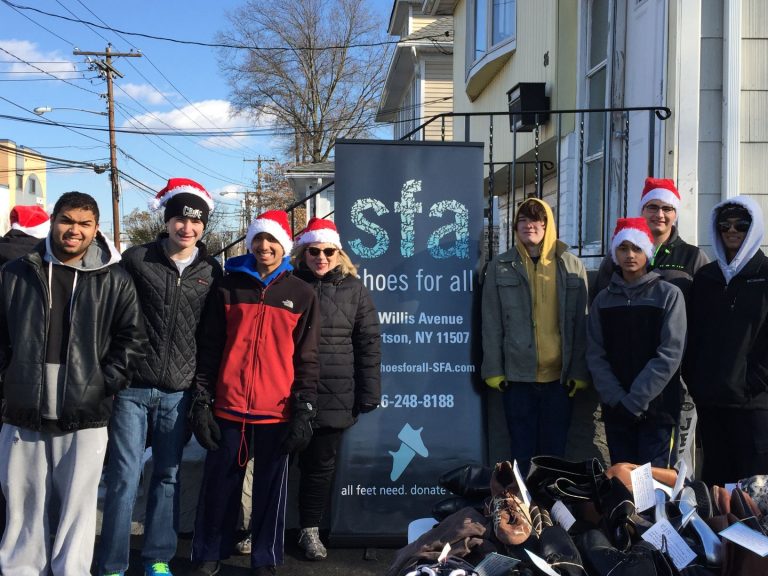 In 2010, Dr. Mary Carlson didn’t expect to be running a charity in addition to her Williston Park podiatry practice.

In the fall of that year, she set up a booth at the Williston Day Street Fair to collect shoes for people who needed them. She put an ad for the shoe drive in the Williston Times, expecting a modest collection.

But people came with shopping bags and garbage bags full of shoes, she said, and her booth netted more than 500 pairs that day.

“I was shocked,” said Carlson, who’s practiced on Willis Avenue for 10 years. “I’m still shocked, to this day.”

A few months later she turned the effort into Shoes for All, a non-profit that’s given more than 45,000 pairs of shoes to local charities since then, including a delivery of more than 300 pairs Dec. 22 to Harvest for the World in Roosevelt.

They’ve been on board from the beginning, she said, along with a group called the “McAngels,” an offshoot of the Ronald McDonald House of Long Island.

With help from a total of about 50 volunteers, Shoes For All collects, cleans, sorts and distributes between 13,000 and 15,000 pairs of shoes each year, Carlson said.

The help comes from churches, businesses, service groups and kids looking to spend some time helping others, she said.

“You always need more,” Carlson said. “I have a core that I can call at any time that can help, but it’s grown.”

The shoes go to several different organizations in Nassau and Suffolk counties, including soup kitchens, churches and community initiatives, and some in Jamaica, Queens, and East New York, Brooklyn.

Carlson said her podiatry practice and Shoes for All help support each other.

She often tells patients their foot is causing them problems, not their shoes. The natural next step is to clean out their closets and donate their old shoes, she said.

“Everybody knows that I do this, so it’s a base for community service outreach also,” Carlson said.

Carlson said she knew Shoes for All was meant to be when the process of growing it proved to be fairly seamless.

A lawyer volunteered to helped incorporate the organization as a non-profit, accountants helped get it tax-exempt status and a Capital One bank branch in Albertson donated office space.

“When things go like that and you don’t need resistance, it tells you that there is a need for this, this is something that you should continue to do. It’s worthwhile doing,” Carlson said. “There was never an obstruction in my path with any of this, so that’s why I continue to do it.”