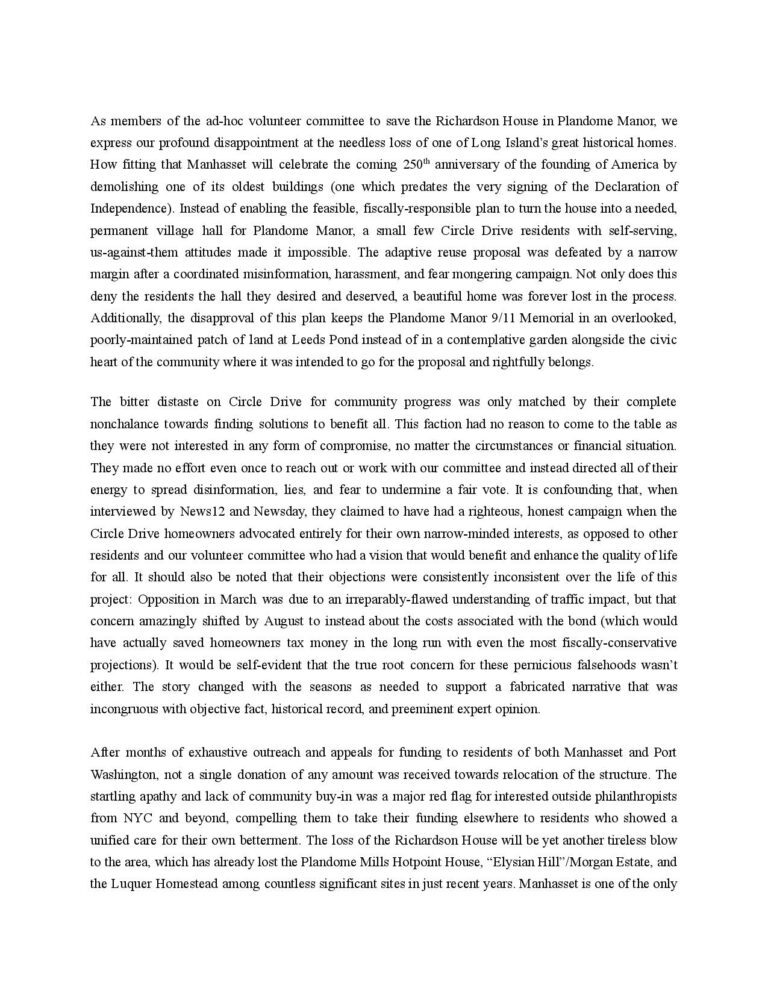 As members of the ad-hoc volunteer committee to save the Richardson House in Plandome Manor, we express our profound disappointment at the needless loss of one of Long Island’s great historical homes.

How fitting that Manhasset will celebrate the coming 250th anniversary of the founding of America by demolishing one of its oldest buildings (one which predates the very signing of the Declaration of Independence).

Instead of enabling the feasible, fiscally-responsible plan to turn the house into a needed, permanent village hall for Plandome Manor, a small few Circle Drive residents with self-serving, us-against-them attitudes made it impossible.

The adaptive reuse proposal was defeated by a narrow margin after a coordinated misinformation, harassment, and fear-mongering campaign.

Not only does this deny the residents the hall they desired and deserved, a beautiful home was forever lost in the process.

Additionally, the disapproval of this plan keeps the Plandome Manor 9/11 Memorial in an overlooked, poorly maintained patch of land at Leeds Pond instead of in a contemplative garden alongside the civic heart of the community where it was intended to go for the proposal and rightfully belongs.

The bitter distaste on Circle Drive for community progress was only matched by their complete nonchalance towards finding solutions to benefit all.

This faction had no reason to come to the table as they were not interested in any form of compromise, no matter the circumstances or financial situation. They made no effort even once to reach out or work with our committee and instead directed all of their energy to spread disinformation, lies, and fear to undermine a fair vote.

It is confounding that, when interviewed by News12 and Newsday, they claimed to have had a righteous, honest campaign when the Circle Drive homeowners advocated entirely for their own narrow-minded interests, as opposed to other residents and our volunteer committee who had a vision that would benefit and enhance the quality of life for all.

It should also be noted that their objections were consistently inconsistent over the life of this project: Opposition in March was due to an irreparably flawed understanding of traffic impact, but that concern amazingly shifted by August to instead about the costs associated with the bond (which would have actually saved homeowners tax money in the long run with even the most fiscally conservative projections).

It would be self-evident that the true root concern for these pernicious falsehoods wasn’t either. The story changed with the seasons as needed to support a fabricated narrative that was incongruous with objective fact, historical records, and preeminent expert opinion.

After months of exhaustive outreach and appeals for funding to residents of both Manhasset and Port Washington, not a single donation of any amount was received towards the relocation of the structure.

The startling apathy and lack of community buy-in was a major red flag for interested outside philanthropists from New York City and beyond, compelling them to take their funding elsewhere to residents who showed unified care for their own betterment.

The loss of the Richardson House will be yet another tireless blow to the area, which has already lost the Plandome Mills Hotpoint House, “Elysian Hill”/Morgan Estate, and the Luquer Homestead. among countless significant sites in just recent years.

Manhasset is one of the only locales in all of New York State that still has never had a historical society.

The only question now is whether this dark moment in our shared history will continue to repeat itself. The residents of Plandome Manor need to take heed that only a handful of historic sites remain and once they are gone, there is no turning back the clock.

Do not waste any future opportunity to save what little is left. If not for ourselves, then for our children.

Preservation of old gives us our history and burnishes our knowledge of the past, and our excitement for the present and future. We must finally wake up and come together to advocate for and protect what little we have left of our past before it is too late.

It is this very history that creates the backdrop allowing real estate and development to flourish. To lose these old buildings is to lose the essence of what makes Manhasset such a beautiful and desirable place to live and raise a family.

In the end, Manhasset and its villages will get what they admire, will pay for, and ultimately, what they deserve.

On behalf of the committee,